7 Huge Financial Mistakes I Made During College 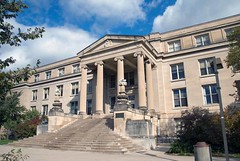 Over the last few weeks, I have been reflecting on how many members of my rather close extended family are either near high school graduation or are in college right now. They have so many great opportunities ahead of them in the next few years – and so many chances to botch things, too. Stephen, Brittany, Robert – these are some of the stupid things I did in college that I wound up regretting financially for years. In some ways, I’m still suffering the repercussions. Don’t do the same.

One of the first major articles I wrote on The Simple Dollar was a ten-part series that amounted to my personal financial biography – if you’re interested, it starts here. Reflecting back on a lifetime of financial mistakes, I always come back to the idea that

my college years were when things really went off the rails for me. Those first years of financial independence, where I had no idea what I was doing with money and no sensible guidance to help me out, caused me to develop a lot of atrocious money habits. While I

covered a few of them in the biography, I felt that I only really scratched the surface when it came to the mistakes that I made.

Here, then, are the seven biggest financial mis-steps of my college career. I sincerely hope that you don’t make the same ones.

1. Going in the door without a clue.
When I went to college, I not only had no idea what I wanted to study, but I had absolutely no idea what the experience would be like. The end result? I wasted a lot of time in classes that I didn’t really need. I spent time blindly involved in activities and social events that never really clicked with me. I built at least three distinctly different groups of friends during my college years – and watched them all dissolve in a blink. I failed to really get involved with anything interesting until very near the end of my college years.

What I should have done More than anything, I wish I had spent my junior and senior year in high school doing some real soul searching to figure out what I wanted to do with my life. I also wish I had asked everyone I knew that had attended college for advice on the experience just so I knew what things people consistently found valuable. I didn’t do either of these things.

2. Extending my stay for two extra years.
After four years, I had actually managed to complete a degree within the years covered by my scholarship. Sounds like a perfect time to start a second one, huh? I spent two more years in school – paying out of pocket via student loans – earning a second degree.

What I should have done Again, if I had properly explored my interests early on, I would have had a much better idea as to what I should have studied in college. Similarly, I should have ignored any and all advice relating to what major you should or shouldn’t have if you want to earn a good income. Earning a good income relies much more on building diverse and marketable skills, not what you majored in – what’s actually important is that you completed a degree and learned some generally useful skills along the way.

3. Failing to take advantage of all of the non-classroom opportunities.
I spent much of my extracurricular time in college wasting time. I played piles of video games, hung out with a lot of people that I barely saw again after college, watched piles of awful movies, and thoroughly explored the outer boundaries of wasting time. While “downtime” is a healthy thing in reasonable amounts, I certainly burned through more than my fair share of it.

What I should have done I don’t entirely regret all of the time I spent involved in such frivolous activities – some total leisure time is good for everyone’s mind. However, I should have spent at least some of that time involved in activities that were simultaneously fun and also enriching in some fashion, such as seeking out interesting organizations to participate in or getting involved with volunteer projects or actually building some connections and friendships with people on some version of my own career path. I didn’t do any of that, and it was a profound misuse of my time and also of my financial investment in school.

4. Signing up for a credit card – then using it with reckless abandon.
During my second year of college, I signed up for a credit card at one of those little booths that credit card companies like to stick up on college campuses. I don’t remember exactly why I signed up – it probably seemed like a good idea at the moment and I likely got a free t-shirt out of the deal. The real problem came later – I decided to start using it a little. And, rather quickly, a little turned into a lot. By the time I left school, I had thousands in built-up credit card debt.

What I should have done Signing up for the card wouldn’t have been a huge mistake if I had a plan in place for using it. I should have simply used the card to pay for textbooks each semester, then lived off of my stipend and the money I made from a part-time job. That way, I could have built up my credit in a positive fashion and not left college with a bunch of needless consumer debt that required me to keep writing fat payment checks for years.

5. Not taking my classes with enough seriousness.
For the first few years of my college career – actually, for all the years except for my last one – I believed I could coast through things using the awful study habits I had built up during my high school years. In other words, I believed that I didn’t have to study for tests and that I could handle assignments by doing them the night before. Both assumptions were absolutely ridiculous – and my GPA suffered greatly for it. My final year’s GPA was almost a full point higher than my cumulative one – and my final year was the only one that I used healthy study and assignment habits. That GPA turned out to be a barrier against getting into graduate school in my area of interest – and it also didn’t help with my initial job hunt.

What I should have done I knew from the start that my study habits were awful, but I was able to squeak by with those habits. Instead of just squeaking by, I should have put serious effort into picking up solid habits from the start – and there were certainly opportunities for it. Simply using better classroom and study habits would have substantially raised my GPA – and likely substantially raised my short term post-college earnings and opportunities.

6. Not figuring out how to manage my money right off the bat.
For my first four years in college, I used a check cashing service to cash my paychecks from my part-time job, and I used money orders to pay bills. Seriously. I would dock myself 4% for the check cashing fee, then I’d dock myself almost another dollar for each “check” I would write. Even when I finally got a free checking account at a local bank (with free checks!), I didn’t even try to keep the account balanced at all. Instead, I mostly just relied on memory and whatever balance the ATM told me I had in the account. The end result? Lots of ATM fees and more than a few overdraft fees during those heady college days.

What I should have done I should have signed up for that free checking account on the first day of school. If I were doing things all over again, I’d sign up for something like ING’s Electric Orange so I could do most of my checking account business purely online and have any paychecks directly deposited there. That way, I would avoid almost all of the stupid fees I paid, have access to all of the information about my account all at once, and also earn some interest on that balance.

7. Living large off of my stipend and student loans.
During my first four years of school, I actually had a surplus of scholarships that enabled me to receive a small living stipend while I attended school. Yet I managed to spend all of that, all of the money I earned from my part-time work, and built up some credit card debt as well. During my final two years, I took out the largest student loans I could so that I could continue to have that “stipend” money and keep living that lifestyle.

What I should have done I should have actually attempted to live the cheap college student lifestyle. There was always tons of free entertainment available around campus, and plenty of free food if you attended group meetings. I didn’t really need all of the electronics I bought, either – most of them were scarcely used at all. Instead, my focus should have been on trying to build up some savings my first four years so that my student loans would have been lower my final two years – or, even better, that saved money could have been a good start on my post-graduation life had I been able to actually graduate in four years.

What did these mistakes add up to? When I left college, I had over $30,000 in student loan debt (unnecessary), two degrees (one of which I didn’t really use at all), several thousand in credit card debt (totally unnecessary), a subpar GPA (easily avoidable), and only a few good connections and friendships that lasted into post-college life (although the few I had turned out to be very good ones). In many ways, I’m still paying for those mistakes, many years after graduation.

Don’t let it happen to you.