In early spring of this year, my husband and I did something drastic: We hired two separate contractors to add a family room addition and new patio to the back of our home.

Our initial idea was to add a three-season room, but we opted to do a traditional room addition when we determined the cost wouldn’t be significantly higher. Tired of our old, rotting deck, uneven paver patio, and excessive flower beds, we also decided to add a new paver patio or stamped concrete patio behind our home.

We did a ton of research to find the right contractors and had seven different people come over to give us quotes. When it came to the actual room addition, we ultimately went with the contractor who could start the project soon at a price we were comfortable with. At $60,000 for the 15-foot-by-25-foot room addition, his quote wasn’t the cheapest. However, we did feel confident in his methods and ability to get the job done.

Lessons Learned From an $85,000 Home Renovation

Fast forward seven months later, and our entire project is fully completed. We have the family room we’ve always wanted, a pretty epic paver patio, and grass in our yard for the first time in several months.

But, it took a lot to get here — a lot of stress, a lot of disappointment, and a whole lot of money, some of which wasn’t exactly planned for.

While our project was well worth it and I’m happy with the results and the feel of my new home, we learned a lot about ourselves and big projects while enduring a long, hot summer with a torn-up backyard. Here are some of the lessons we learned after blowing through $85,000 and adding a room onto our home:

#1: Anything that can go wrong probably will.

Almost everyone who has built a home or worked with a contractor in some capacity has their own list of horror stories. Sometimes contractors don’t show up. Other times they start jobs and leave them unfinished for months — or even years. Nothing quite that drastic happened during our project, but we did have our share of mishaps.

For starters, our home remodeling project was supposed to be done by mid-July. The thing is, that timeline quickly became impossible since our contractor didn’t even break ground until the end of July! Imagine how stressful that was, considering we spent weeks tearing out the old deck and patio in May. For most of the warm season, our yard was entirely unusable.

Other problems we encountered along the way included:

The entire project seemed like a comedy of errors sometimes, although it was hard to laugh with so much on the line. I endured many nights with barely any sleep, and countless tears were shed.  Each time something went wrong, it was also up to us to sort it out with our general contractor.

#2: You must stand your ground.

Part of “sorting it out” required us to firmly stand our ground and demand that different things were fixed when something went wrong. One situation where we had to be especially firm was when the siding and trim on our addition didn’t line up with our existing siding and trim.

While we didn’t watch the workers like hawks when they put the siding on that day, one would think you would automatically line up the base trim board with the existing one, right? Well, no. The subcontractors who did the siding said that they didn’t line it up and didn’t think it was a big deal.

But, I did think it was a big deal. There was no way I was going to spend a ton of money on a room addition just for it to have a shoddy, mishandled appearance. Once I noticed the siding was off, I knew it would drive me crazy for decades, and I told my contractor they needed to redo it.

While he initially proposed a few solutions that would make the siding look slightly better, I had to stand my ground and demand it was redone altogether. Our contractor did not want to hear this, but he ultimately agreed. And, in the end, they took off all the siding, added new weatherproofing underneath, and put it all back on.

I know for a fact that they wouldn’t have replaced the siding if we didn’t demand it. And we all know that, if I hadn’t stood up for myself, I would have been stuck with misaligned siding and trim forever.

One reason I was able to force the siding issue is that I didn’t pay the contractor the final half of the bill until the job was over and I was fully satisfied. He did ask for 45% of the total upfront to pay for an architect and all the materials, but I was free to withhold the rest of the payment until the job was complete due to the verbiage in our contract.

I am so glad I knew I shouldn’t pay early — even though our project took longer than expected. I was able to get our siding replaced because our contractor knew full and well that I wasn’t going to pay the bill until I was totally happy with the job.

#4: You have to think through every aspect of your project.

Another thing we did “right” during our project was taking the time to think through each aspect of the job to come up with a realistic remodeling budget. While we knew the room addition itself was going to cost $60,000, there was so much more we had to pay for in order to receive a finished product. Some of the “extras” for our project included:

Because we thought through almost everything we would need to pay for ahead of time, we were able to save up enough money to cover the project without going into debt. This was very important to me since we paid off our home and didn’t want to have to borrow money again.

#5: Be prepared to pay more than you think.

No matter how diligent you are, it’s impossible to plan for everything. Due to the excessive wear and tear our project caused, we ended up having to replace our privacy fence after the room addition and yard were complete. The fence didn’t look that great and had been falling down in some places, but we believed we could salvage it and make it last a few more years. In the end, we were wrong.

The fence replacement meant another $8,000 down the drain, although it really does look nice.

Another surprise bill came when we realized the project took so long we could no longer plant grass and expect it to grow. While we planned to plant seed and grow grass during late summer instead of sodding our entire yard, our late October finish date meant we had to sod, well… basically everything.

#6: Remodeling can still be a good idea.

My husband and I bought our home for around $187,000 in 2014, and home values in our area have surged since then. By adding a family room and paver patio, we were able to stay in a neighborhood we love, avoid all the hassles and costs that come with moving, and keep all the equity we gained by buying our home below market value in the first place. Based on recent sales in our neighborhood, it appears our home is worth a lot more than we’ve invested into it, factoring in both the initial sales price and the extra money we’ve spent fixing it up.

Now that the project is over and we’re able to enjoy it, I know for a fact that our $85,000 investment offered tremendous value in return. We now have a room we love spending time in, a backyard that’s much more usable than ever before, and an overall look that is much more professional. 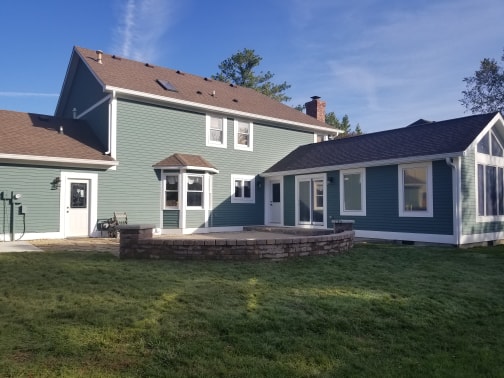 While our home remodeling project was a huge pain and way more stressful than it needed to be, I’m still happy with the end result. And despite all the problems we faced, I would do it all again.

When you need more space or need to make a big change to the way you live, sometimes packing up and moving is the answer. Other times, working with what you have can get you a better result with less hassle and stress.

In our case, we spent a lot of money, endured a lot of hassles and headaches, and still feel like we made the right decision. We have $85,000 less in the bank than when we started, but we made our house into our dream home.