Some Thoughts on the Small House Movement: Is It Something Worth Considering?

Over the last week, several readers have written to me with various comments, suggestions, and questions related to the so-called “small house movement.” Given that it’s a great way to save money (as I’ll discuss below), I thought it’d be worthwhile to investigate the movement in detail.

What is the “small house movement”?
From the website of the Small House Society:

The Small House Society is a voice for the Small House Movement. That movement includes movie stars who have downsized into 3000 square feet, families of five happy in an arts and crafts bungalow, multifamily housing in a variety of forms, and more extreme examples, such as people on houseboats and in trailers with just a few hundred square feet around them. Size is relative, and mainly we promote discussion about the ecological, economic and psychological toll that excessive housing takes on our lives, and what some of us are doing to live better. It’s not a movement about people claiming to be “tinier than thou” but rather people making their own choices toward simpler and smaller living however they feel best fits their life. 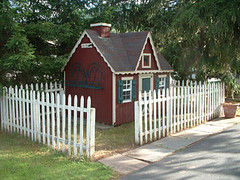 In other words, the “small house movement” includes people who are making a conscious choice to live in a smaller home rather than choosing a larger one. It includes people who could afford McMansions but live in only a 3,000 square foot home all the way down to single people living in a tiny one-room home (as depicted beautifully on that site).

There are a lot of reasons for doing this.

Ecology A small home simply uses fewer natural resources than a large one, both in the construction and in the maintenance (energy use, for example).

Psychology Because the home is small, one can invest fewer “mental cycles” in the upkeep of the home as compared to a large home.

Time Not only that, the actual upkeep takes significantly less time as well. With fewer square feet, it takes far less time to get the house clean.

And the big one…

How can a “small house” save me money?
There are several strong financial reasons for considering the “small house movement.”

Less initial cost Purchasing a smaller house means there’s a smaller initial cost to purchase the home. This may mean a smaller mortgage, a potentially lower interest rate on that mortgage, or perhaps even the ability to pay for the house using only cash.

Less maintenance cost With a small home, you’ll have a far lower energy bill. You’ll also have less expense for cleaning materials and fewer repair costs, too – a smaller roof means fewer shingles are needed to re-shingle, after all.

Less room to store unnecessary stuff If you own a smaller house, you have less space for storage, which directly impacts the amount of excess “stuff” you can accumulate. Thus, it becomes more difficult to spend money on impulsive buys – there simply isn’t anywhere to put it!

More time to devote to other money-making endeavors With the decrease in time needed to be spent on housecleaning and home upkeep, one can devote more time to other activities. Take those extra few hours a week and start a side business – or perhaps take up a part-time job for more income.

My personal take
My belief is that part of the recent trend towards large houses was fueled by the crazy housing bubble of the first part of the decade. People would build larger houses than they need under the impression that this house would be a great investment that would make their expenditure worthwhile.

In short, before you buy a home, know what you can afford, compare it to the rental options in your situation, and don’t put pressure on your budget. All three of these factors point toward buying a small home rather than a large one, as a small home is more initially affordable and won’t pressure your budget as much as a large home.

In other words, when it comes time to purchase a home, set your sights lower instead of higher. Taking all factors into consideration, a more modest home might be the right choice for your long-term financial future.

Loading Disqus Comments ...
Financial
TOOLBOX
Drowning in credit card debt?
Try a Balance Transfer Card
Is your money making money?
Choose a High-Yield Savings Account
Tired of huge interest payments?
Consider Debt Consolidation
Latest from Trent
What Happens If You Live to 100? Here’s How to Manage Longevity Risk in Retirement
What You Need to Know About Online Banks
Is Coasting a Good Retirement Strategy?
Read more from Trent
Featured on: