Why You Should Stop Watching T.V. and What to Replace it With 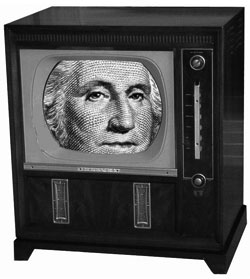 My wife and I have reduced our television viewing to roughly four hours a week: two hourly dramas and maybe two more hours combined throughout the week. I believe that it won’t be too long before we turn the television off for good. Why? It’s too expensive. Here are ten reasons why.

Our cable bill used to cost us roughly $60 a month. That adds up to $720 a year spent just to get more programming. Three years worth of that and we’re looking at a very nice vacation. Five or six years of that, put into a savings account, potentially replaces a car.

We had two televisions, and they would each be on an average of four hours a day. Given a cost of $0.10 per kilowatt hour, and the fact that the smaller television used about 100 watts and the larger one used about 160 watts, that meant we were using a bit over a kilowatt hour each day. There’s another $40 a year that vanished.

Television programs often create a glamorous image of a life that is far outside the financial capabilities of most people watching. When viewers watch such programs then reflect on their lives, it creates a set of negative feelings. For me, the most prevalent feeling was guilt – I can’t give my family this stuff, I would think. Thus, my sense of self-worth would go down. This would put me in a mindset to be more susceptible to the ….

Those wonderful short little programs that are designed to sell you stuff, period. Even better: they often work in concert with the programs to create a sense of guilt – and they offer a psychological way out. One commercial isn’t powerful, but when you’re inundated with them… very powerful.

Less time for other opportunities

If the television is on for four hours a day, that’s four hours where I could be doing something more constructive with my time, like starting a successful blog (*ahem*) or starting a business or working on a novel or getting household chores done and so forth.

When we spend a lot of time watching television, we put off other things that we should be doing, like paying bills, playing with the kids, and so on. After a while, these things build up and we begin to feel stress in our lives that wouldn’t be there if we didn’t spend so much time watching television. Over time, elevated stress leads to health issues.

Instead of spending time preparing a healthy, inexpensive meal from scratch, we would hurry up and eat an more expensive prepackaged meal (or takeout) so that we could catch certain television programs. These costs added up, not only on our wallets, but also around our waists.

Television is almost always a sedentary activity. Over time, it begins to show. Television is the big reason for the “obesity epidemic,” because Americans simply don’t get the natural exercise from doing non-sedentary activities that they once got. The health costs from this can be tremendous.

When the television is on for hours each day, it’s much more difficult to have real conversations with the people in your life. Over time, less communication means weaker relationships with the people you love, and this means that quite often you have to “supplement” the relationship with additional spending.

For a married couple, not only is it good exercise (and thus healthy), it’s free and it can help heal a lot of costly relationship issues. With heavy television usage, particularly in the bedroom, couples can fall asleep watching television instead of in each other’s arms. I know it’s true from experience.

If you take a one week challenge to turn off the television, several things will happen, chief among them boredom and a sense of having a ton of “empty” time. Here are ten things to do to fill that time.

If you didn’t watch Mad Money every night at six o’clock, you might be able to spend that hour walking around the block, doing leg lifts, or doing an aerobic workout. Most exercise routines cost nothing, though it can be more fun if you do something like a DDR exercise regimen (something I’d love to write about, but I can’t really conceive of how it fits on The Simple Dollar).

Learn how to cook at home. Prepare some interesting meals. Get a good cookbook and dig in.

Something like Anna Karenina or The Rise of Theodore Roosevelt (both were the “book I always wanted to read” for me at various times). Read something to educate your mind and your spirit.

I keep this blog running on less time than I used to spend watching television each night and it is earning some money. I also started a computer consulting business, where I fix people’s computers locally. This has opened up two solid revenue streams for me that, added together, approximate what I made from my job before. This has made me feel much less stressed about work – I do my job, but it no longer has the paralyzing “Oh my God what if they downsize?” fear that it used to have.

Have healthy, focused conversations with your immediate family. Patch up bruised relationships and friendships. Go out to community events and meet people. Find a group connected to the things you’re interested in and get involved (like a book club).

Most universities offer degree programs towards a master’s degree (or higher) in the evenings. See what’s available and get into such a program. It will fill your evenings with food for thought and put you on a much stronger career path.

Learn a new skill or a new hobby.

When my great grandfather died, my great grandmother spent her evenings learning how to paint, something she’d always wanted to learn how to do. She had a ton of natural skill, and as she learned the craft, it began to show. It was something that her married life and television watching had never left time for before.

Take on a major project.

Do something huge that you’ve always wanted to do. I’ve done things like made a homemade bullwhip, learned how to speak Mandarin, and so on, just in my newfound spare time.

When I finally turned off the television and looked around, I saw literally hundreds of little things that needed to be done that I simply hadn’t done. So I started getting them done; I literally spent three days making a giant checklist of every task that would take longer than five minutes, then I just started going through them. I felt so productive while doing this that it was a huge endorphin rush just by itself.

Take care of whatever bothers you.

For me, it was taking a little bit of time each day to meditate and get in touch with my spiritual side, and it made a huge difference in my life.

In short, by cutting out television, you can not only directly save money, but live a much more rich and fulfilling life.