The Art of the Marinade: Making Inexpensive Foods Dazzlingly Tasty for Pennies 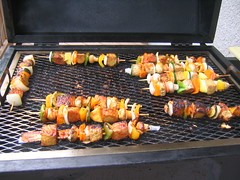 Whenever I see great deals on free range chicken or beef, I stock up without hesitation, filling our freezer with pounds of roast, tenderloins, chicken breasts (and other pieces… and whole chickens), fish fillets, steaks, and chops. You might open our freezer and see dozens of pounds of such cuts, purchased because we found an exceptional deal.

One big complaint I often hear with such bulk food buying is that it’s boring. One older email from Jennifer sums this feeling up quite succinctly:

Buying food in such bulk quantities seems incredibly boring to me. What can possibly be tasty or exciting about having chops for the twentieth time this year?

I agree with Jennifer on one level – having the same old boring chops or chicken breasts every week for months would get quite old. I would certainly get tired of it, anyway.

The trick is to know how to jazz up these entrees, making them into something much more interesting – and with much more variety – for just pennies. Around here, most of our entrees find themselves undergoing some sort of preparation which will widely vary the flavor.

About Marinating Meat
The purpose of marinating meat is twofold. First, it serves to tenderize the meat – that’s why most marinade recipes include some sort of acid (vinegar and fruit juice are common ones). Simply soaking a meat in such a solution makes the meat softer – easier to cut and easier to chew. It also causes the meat to absorb some of the liquid, often making it moister.

Second (and perhaps more important), marinades imbue meat with additional flavors. During the process of softening the meat, the meat absorbs some of the liquid around it. If that liquid includes a variety of flavors, those flavors are absorbed into the meat itself.

What if you’re vegetarian? Almost any tough vegetable can be marinated. Zucchini, cucumbers, squash, and eggplant all turn out very well when marinated. In fact, I often use such tougher vegetables as a side dish.

About marinate versus marinade: marinate usually refers to the process of soaking the meat, while marinade refers to the liquid solution in which the meat is soaked.

Trent’s Ten Favorite Homemade “Nickel” Marinades
Here are ten homemade marinades that cost just pennies and can each really improve the flavor of your food. Using these marinades can transform an ordinary cut of meat in ten drastically different ways, from spicy to sweet, from sharp to subtle, from Mediterranean to Asian. Just mix the ingredients together, put the mixture on the meat in a bowl, and let it soak according to the times below – when it’s done, cook the meat as you normally would and enjoy some distinctive and delicious flavors!

Teriyaki Marinade 1/4 cup vegetable oil, 1/4 cup brown sugar, 3 oz. soy sauce, 1 clove garlic or one teaspoon garlic powder, and 1/2 cup pineapple juice (this is fairly low acid marinade, so leave it on for twice as long as listed below)

(Oops… did I include eleven marinades?)

How Long Should I Marinate?
If you marniate a meat too long, the meat will become soft and mushy from the effects of the natural acids in the marinade. If you don’t leave it on long enough, the meat won’t gain enough extra flavor. Here are some starting numbers to use – obviously, times may vary depending on the size of your meat, but these should get you in the ballpark.

Additional Tips
First of all, don’t toss the marinade when you’re finished soaking the meat! I like to pour the leftover marinade directly on the entree just as it goes on the grill or into the skillet. This packs an additional punch of flavor. However, do not save the marinade and use it later in the cooking process – a marinade must be cooked just like the meat is, and if it is not, you run the risk of ingesting unhealthy proteins.

Another use for the marinades: they make great mix-ins for burgers. Make up a batch of your favorite, then add it directly to ground beef or ground turkey, roughly 1/2 cup per pound of meat. It can really change the dynamic of the burger!

Another tactic I like to use to try new marinades to ask for marinades and sauces for Christmas gifts, particularly those from local companies. We go to several gift exchanges around Christmastime and a few bottles of marinade and sauce make for a great, easy-to-select gift. Combined with the inexpensive bulk meats in our freezer, these sauces and marinades can create a true flavor explosion – much better than some gift you’re anxious to return as soon as you leave.