The internet is a treasure trove if you’re looking for travel deals that can help you save on your next trip.

Want to travel for free? Numerous websites, including this one, can help you navigate the confusing world of credit card rewards. Want travel packages that include airfare, hotel and a rental car? Try Expedia, Priceline, or Travelocity. Need a cheap hotel tonight? There’s an app for just that purpose.

Unfortunately, discount travel deals aren’t always what they’re cracked up to be. Like most industries, the travel industry has a dark side – one where some “discount travel deals” are nothing more than smartly packaged vacations at full price. And if you don’t pay attention, you may end up booking a travel experience that’s not much of a deal after all.

When Discount Travel Isn’t a Deal at All

If you’re aching for a trip and need to save money, it’s only natural to look for deals and discounts. At the same time, you have to do some legwork to make sure any “deal” you’re considering will legitimately save you cash.

Here are three times travel discounts aren’t quite as advantageous as they appear:

I search for and book various components of travel all the time and, if I’ve noticed anything, it’s how tricky some travel websites can be. Discount travel websites like Expedia set their sites up to deceive consumers quite a bit. Many times, the price you see isn’t what you get – and you actually wind up paying more by the end.

This problem is so widespread it only took me a single search to come up with an example.

In this specific search, I looked for a hotel-only package in Playa del Carmen, Mexico, for Dec. 29 to Jan. 5. I included two adults and two children ages 6 and 8 in the search, and here’s what I found: 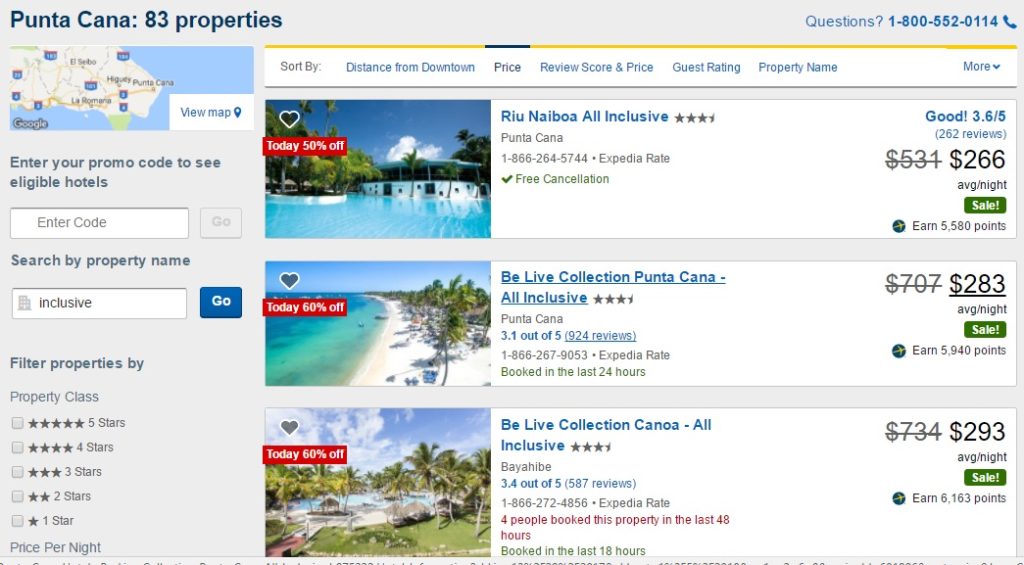 The cheapest all-inclusive resort I can book for these dates is Riu Naiboa. The total price should be $266 per night for two adults and two kids, right?

Click through to the hotel itself and you’ll see the same prices shown. You can see below how we searched for two adults and two kids, illustrated quite clearly: 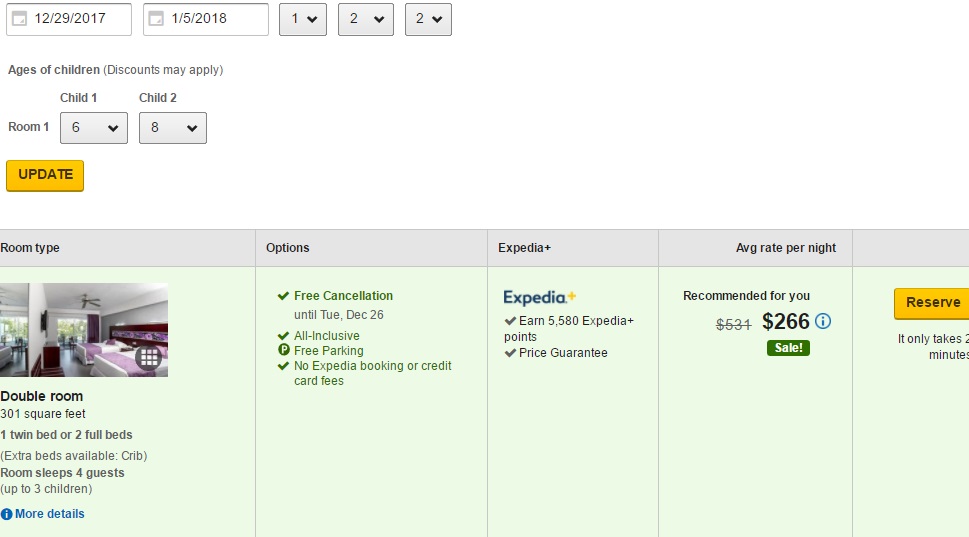 Unfortunately, what you see isn’t what you get – and it’s not even close. When you click through to the payment page, you’ll see the price displayed is around $1,000 more than you probably expect.

Out of nowhere, they show an extra guest fee of $132 per night. So, instead of the $266 per night you were shown when you searched, you’re hit with a bill that asks for almost $400 per night. 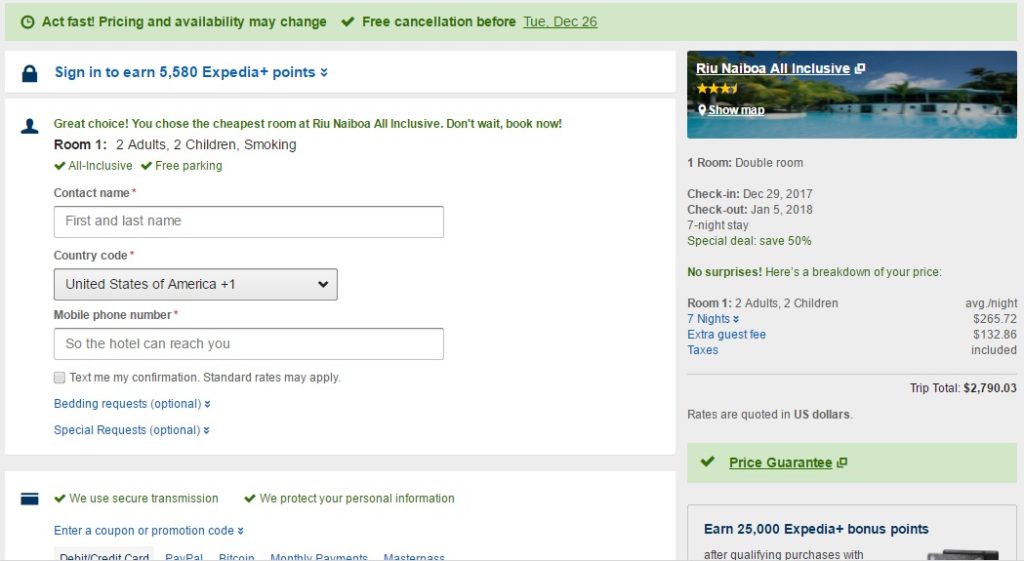 Expedia and other traveler discounts do this all the time. They pull you in with a fair price then tack on fees as you move through the process. The worst part is, none of these additional charges are listed until you get ready to pay.

Groupon Getaways is a travel coupon site that offers discounts on hotels and vacation (airfare and hotel) packages. Just like regular Groupons, you buy a deal with the agreement you’ll remain in compliance with the website’s terms and conditions.

Unfortunately, far too many Groupon Getaways are nothing more than false advertising. Take this 11-day vacation in Paris, Budapest, and Prague, for example. They promise 11 days with airfare, hotels, and train tickets included – and all for $1,199 from select cities!

But, will you really pay $1,199? It actually depends. If you click on the available dates and departure airports, you’ll see that there are only three options for $1,199 — and the rest are up to $1,699 per person. 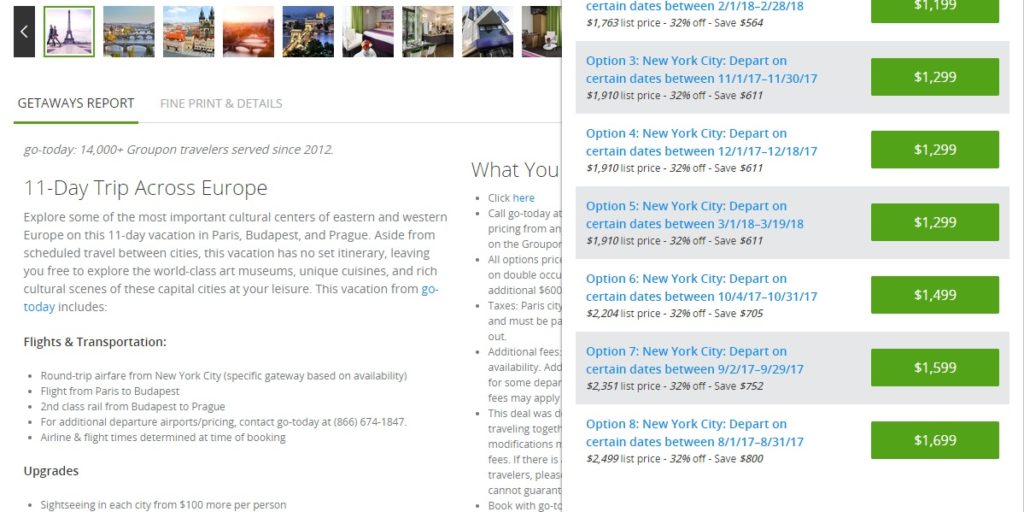 Then, there are the deals that are just plain bad. Take this 5-night all-inclusive vacation with airfare near Playa del Carmen, Mexico. They promise roundtrip flights and an all-inclusive hotel stay for $899 per person.

But, when you dig deeper, something funny happens – as in, the numbers stop adding up.

With a quick search on Expedia, you’ll find the hotel itself is only $209 per night for double occupancy in September. That brings the total for lodging to $1,043 for five nights.

Airfare is only offered via the Groupon from select cities, which, in this case, is Fort Lauderdale, Fla. For these dates (Sept. 3-8), roundtrip flights from FLL are only $239 each via Expedia. That brings our grand total to – what – $478 for flights? 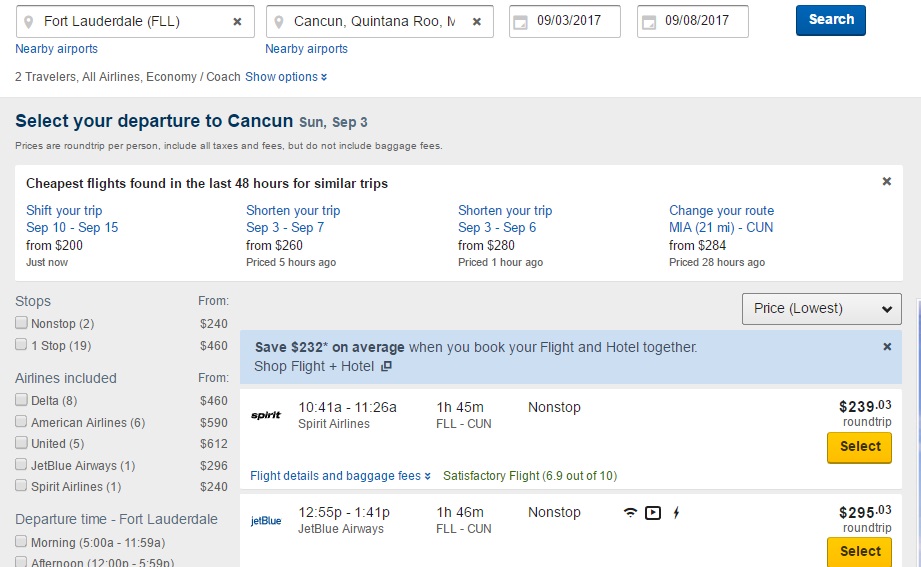 If you add that to the $1,043 you’d pay for the hotel if you booked separately, you’re spending a total of $1,521 for two people to take this vacation.

If you booked through Groupon Getaways, on the other hand, the same trip costs $1,798 for two people. However, it’s actually worse than that, because Groupon Getaways only offers specific dates and flights for this trip. So, not only are you paying more, but you’re tied down to their timeframe.

When you book the two components of your trip separately, on the other hand, you can select any dates of your choosing. That flexibility won’t necessarily help you save more money, but it can help make trip planning a lot easier.

Discount airlines are in the business of making travel cheaper for consumers willing to jump through hoops. Most of their marketing strategies involve driving down the base price of airfare for their bottom-dollar clients.

Unfortunately, almost nothing is included with discount airlines. And if you don’t pay attention and factor in the added fees they charge, you could actually pay more to fly on a bare-bones discount carrier.

Here’s a good example from Allegiant Air. I searched for flights to Orlando from my hometown of Indianapolis, and here’s what I found: 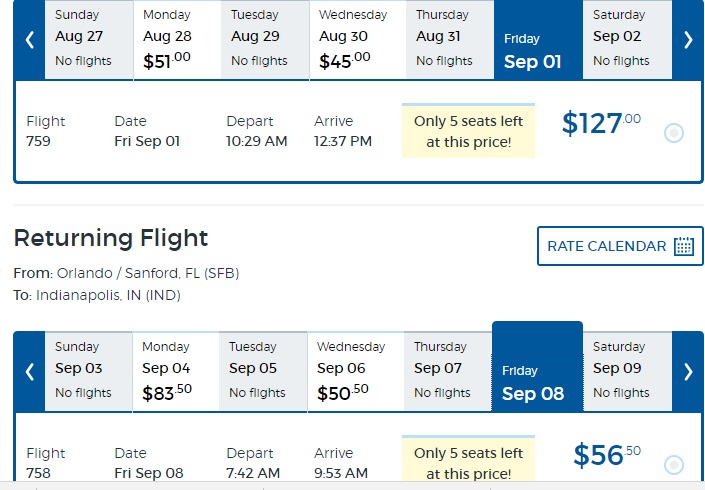 I could fly roundtrip for just $183.50. That’s pretty crazy when you think about it!

Amazing, even — if only it were true.

Unfortunately, choosing a seat would set me back $27 in one direction and $20 in the other. One carry-on bag and one checked bag would cost me another $76 if I prepaid (and more if I paid at the airport).

Those additional costs bring the real total of the flight up to $306.50. That’s not bad at all, but it’s not the best you could do, either. For example, a Southwest Airlines flight for similar dates can cost as little as $198 – and they let you check two bags and bring a carry-on for free.

Heck, you can search for the same flight on Expedia and find American Airlines fares for the same dates for as little as $186. You will have to pay $25 to check a bag, but choosing a seat and bringing a carry-on is free.

Buyer beware: Discount airlines aren’t always what they’re cracked up to be, and sometimes, they’re actually the most expensive.

If you want to save on travel, you need to do more than search for travel deals and check out discount sites. You need to dig into each offer’s details, compare and ask questions, and do some basic math yourself.

A lot of times, the “deals” advertised the most won’t actually save you money at all. So read the fine print, price out individual trip components, and go with your gut.

If a travel deal seems sketchy or too good to be true, it probably is.

Have you ever bought into a travel deal that wasn’t what you thought? What other shady travel deals would you add to this list?