Several months ago, I was curious about how much heat was lost when I opened up the oven to inspect a dish cooking in there. I put an oven thermometer in the oven, waited until the dish I was cooking was almost finished (a casserole cooking at 400 F), then opened the oven door for about ten seconds to inspect it.

During those ten seconds, the thermometer dropped almost 20 degrees. When I closed the door, the temperature slowly returned to 400 F, but during that period, the oven had to put in some extra work to return that heat.

How much? It’s really difficult to exactly calculate that without a meter running specifically for the oven. My best estimate, using a lot of math and thermodynamics, is that you lose about $0.02 worth of energy every time you open the oven door.

My solution? I turn on the oven light when I’m cooking anything in the oven. That way, I just lean over and check what I’m cooking without opening the oven door. The light bulb uses less than a cent of energy per hour of use, so the cost is virtually nil if I flip it on, inspect the food, and flip it off.

It’s the little things – but there are some bigger tricks when it comes to energy use and your oven. 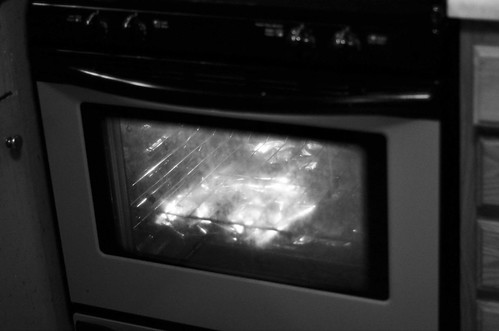 First, unless you’re desperately pinched for time, don’t start preheating the oven until the food is in there. If your recipe says “Preheat the oven to 400 F” and then later says “Bake for 30 minutes,” don’t preheat the oven at all.

Instead, put your food in the oven, then set the temperature to 400 F. Then, add about half of the preheat time to the cooking time.

Why? When you open a preheated oven to put in your dish, it’s no different than opening the oven to check the food near the end of the cooking time. You lose that $0.02. Also, the energy used when preheating the oven isn’t actually being used for anything at all, so that’s also lost energy. Most of the time, when I’m making a meal, a few minutes on the baking time makes little or no difference, so I might as well save that energy.

Another valuable oven tactic is to multitask by using multiple racks. If I’m cooking a meal on one rack, I might as well throw in a loaf of bread or something else that can also cook while the oven is running. The extra energy used to cook the second (or third) item is much lower than the energy you’d lose by heating the oven a second time (think about the heat coming off your oven on cooldown – that’s money wasted, so why do it multiple times?).

Another simple tactic is to use glass, ceramic, or earthenware baking dishes rather than metal ones. These hold heat much better than metal pans. If I’m using such pans, I know I can drop the cooking temperature by 20 or 25 degrees or shave some total time off of the cooking just because of the more efficient use of heat.

These tips, taken as a whole, can significantly reduce the time your oven