It seems like something that’s incredibly obvious and perhaps bordering on stupid. Most of us were taught in childhood to wash our hands after using the restroom. What does that have to do with personal finance?

The truth is that the simple act of washing your hands is a surprisingly good financial tactic. It can help your career, boost your productivity, and save you money on over-the-counter medications.

It’s such a simple little thing, but it ends up making a big difference. 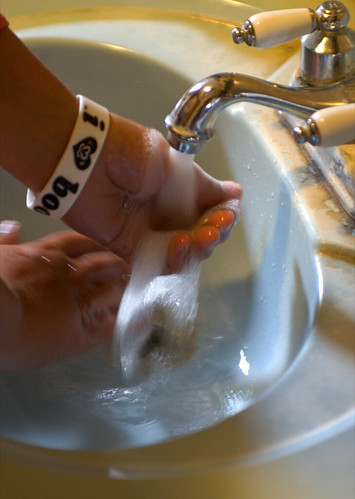 Handwashing is perhaps the best defense we have against the spread of illnesses of all kinds. Illnesses lead to lost productivity, ill feelings, sick days, doctor’s visits, medications, and other expenses, all of which cost us financially and otherwise.

The last significant illness I had resulted in a doctor’s visit (including the drive there and home), the purchase of two different over-the-counter medications, and about two and a half days of productivity lost because I was laying in bed feeling miserable. I’m also fairly sure that I passed the illness on to my toddler (who couldn’t resist coming into the bedroom to visit daddy), which resulted in another doctor’s visit, some more medication, and some time spent caring for the sick boy.

All of those costs added up. Medicine, doctor’s visits, transportation, lost productivity, and physical misery have real costs. Proper hand washing very easily could have prevented all of those costs.

Again, those things are obvious, but it’s really easy to forget about it if you’re taking out the garbage as part of a household routine or if you just pet your neighbor’s dog. (I’ve found it easy to just remember to wash my hands each time I come in from the outdoors.)

Of course, as with everything, there’s a balance to be made. I tend not to use anti-bacterial soaps because of anti-bacterial resistance. I also don’t wash my hands that often throughout the day. I only do it before and/or after a necessary event, like going to the bathroom, touching animals, or handling food.