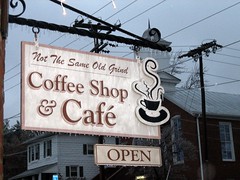 I’m writing this article in a coffee shop, one that I hadn’t set foot in for several months. I’m sipping on a big cup of chai – and it tastes great. I look around at the environment, glance at the newspaper that’s also on my table, and I realize that this is a very nice little morning treat for myself.

A couple years ago, I used to stop here every single weekday. I’d usually get some sort of beverage to go, finishing it off on my way to work. Some evenings, I’d even stop on the way home and get a cup.

Eventually, the experience became routine. It was no longer a treat, it was just a standard part of my weekday. $5 in the morning, $5 many afternoons, all for something completely routine.

At first, I took it one day at a time. I would consciously remind myself not to stop there, even though it felt like the normal thing to do.

After a while, it began to feel normal not to go there, but the temptation remained. I would still drive by the shop and think, “Gee, it’d be nice to stop in there and get a cup.” On occasion, I would, usually when other things were on my mind.

But as more and more time went by and I kept to my regular pattern of not stopping by, I stopped even thinking about it as I drove by. The “norm” of my morning didn’t involve such stops any more. And my wallet was thankful.

Some people might read this story and think, “Yeah, but you had to give up something you enjoy – the stop at that coffee shop for a familiar cup each day.” What I eventually realized is that it wasn’t actually the coffee that I liked.

It was the familiarity of a morning routine.

So I established a new routine. Instead of stopping, I would take a beverage with me in the morning and enjoy it along the way. If I wasn’t finished with it by the time I arrived at work (almost always, I was already finished), I’d sit in the parking lot for a bit, finishing it off and listening to the radio.

After a time, this became the comfortable and familiar morning routine. The warmth of my truck on a cold morning, bundled in my jacket, listening to the radio felt familiar, and stopping to run into the coffee shop became the unfamiliar feeling.

And, with that, the coffee shop stopped being a habit.

Now, I rarely go to coffee shops, but when I do, they feel like a real treat, not a common and ordinary experience. That $5 doesn’t just buy me another ordinary piece in another ordinary morning any more. It now buys an experience – the smells of the coffee and scones, the sturdy table, the leisurely read of a newspaper, the overheard conversation, and the taste of a delicious cup that is sublimely better than the stuff I usually drink.

If I just wanted a morning pick-me-up, I could make it at home for pennies and get roughly the same enjoyment as a daily routine coffee shop visit.

What can you take home from this? Look around your own life. What tired routines of spending money do you engage in on a highly regular basis? Do you shag a fast food breakfast each morning, or perhaps a sandwich as you leave work in the afternoon? Maybe you feel compelled to stop at the gas station every other day for a tobacco product. Or perhaps you always stop by bookstores or electronic stores on Tuesdays to see what the new releases are.

Look for those patterns in your own life – and put a stop to them. Replace them in your routine with a lower-cost alternative. Kick a bad habit in the teeth. Look for lists of new releases online instead of in a store where it’s easy to buy one – or, better yet, start reading or enjoying older media.

Finding those patterns of “ordinary” spending – and knocking them out of your life – is one of the most powerful things you can do to regain financial control.